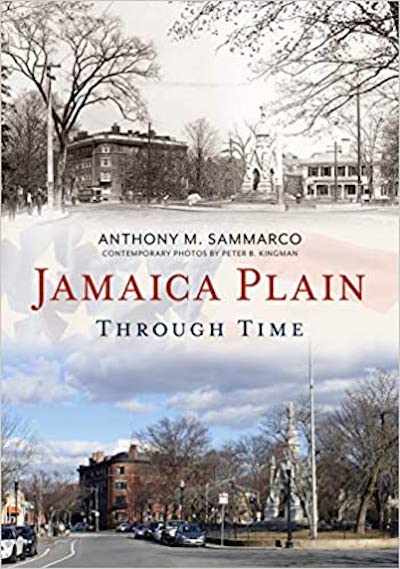 The Jamaica Plain Historical Society presents Boston historian Anthony M. Sammarco who will speak about his new photographic history of Jamaica Plain: Jamaica Plain Through Time. This fascinating book chronicles the neighborhood from the late nineteenth century through to the twenty-first century using contemporary photographs by Peter B. Kingman.

Known in the seventeenth and eighteenth centuries as the Jamaica End of Roxbury, the neighborhood of Jamaica Plain, Massachusetts, evolved from agrarian farmland into one of the more dynamic and inclusive neighborhoods of twenty-first century Boston.

Jamaica Plain became one of the earliest streetcar suburbs of Boston with various forms of transportation linking it to downtown Boston. With horse drawn streetcars, the Boston & Providence Railroad as well as the Boston Elevated Railway, by the turn of the twentieth century, the ease of transportation allowed a thriving nexus of cultures to move to a community that not only saw tremendous residential and commercial development, especially with the numerous breweries along the Stony Brook, but also green space and open lands that were laid out by Frederick Law Olmsted as a part of the “Emerald Necklace” of Boston. Its bucolic setting led to Jamaica Plain being called The Eden of America.

The talk will be virtual. We ask that you pre-register (and the event link will be sent to you before the event) https://www.eventbrite.com/e/jamaica-plain-through-time-book-talk-tickets-134660305599