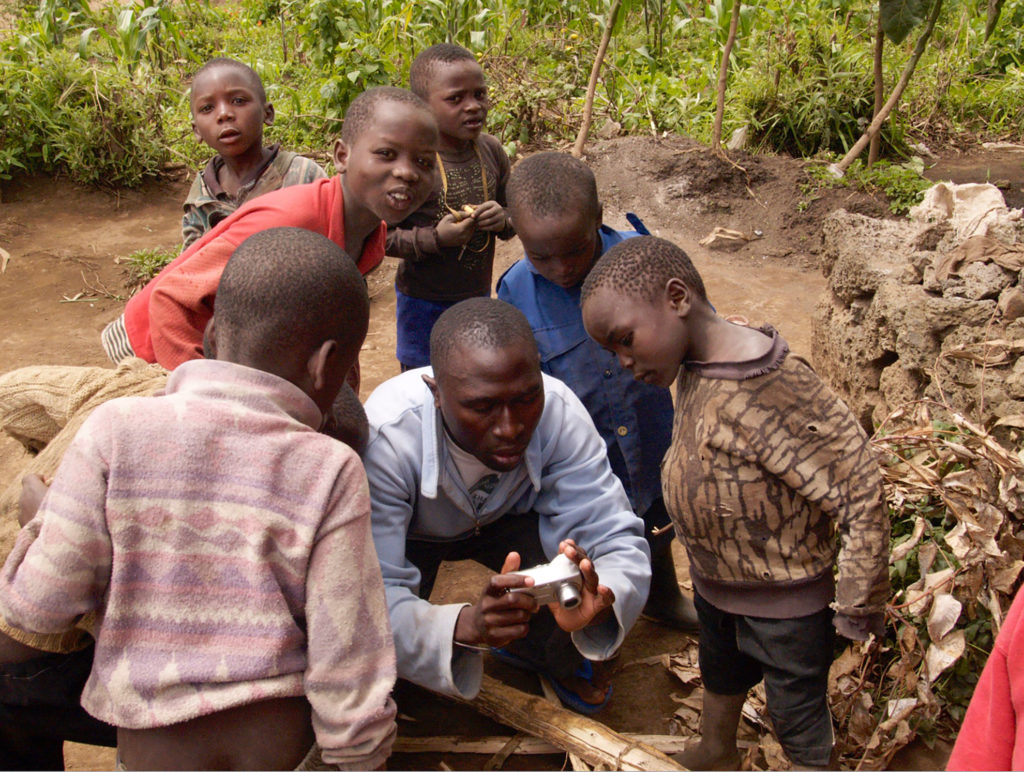 “Photography can help you tell your story…and share it with the world. That can be a like a medicine. That can heal someone.” – Mussa Uwitonze

The 1994 genocide in Rwanda, in which extremists from the dominant Hutu ethnic group went on a killing spree to rid the country of all minority Tutsis, left 800,000 people dead and 95,000 children without parents. Three orphans of the genocide—Gadi Habumugisha, Mussa Uwitonze, and Bizimana Jean—are subjects of a feature documentary, Camera Kids, currently in production by Boston-based GroundTruth Films and supported by a Mass Humanities Project Grant.

The documentary follows Gadi, Mussa and Bizimana on a journey through Rwanda as they try to understand the roots of the genocide that made them orphans. To do that, they meet with, photograph, and interview genocide perpetrators, their families, and their victims. They are the first genocide orphans to begin a conversation with the children of genocide perpetrators.

It’s a story that is itself rooted in storytelling. Gadi, Musa and Bizimana grew up in Imbabazi Orphanage, where they were first given disposable Fuji cameras by Through the Eyes of Children (TTEC), a nonprofit that teaches photography to vulnerable children and helps them to share their stories with the world. For more than a decade, TTEC visited the orphanage and taught photography to a group of 19 kids. The orphans became known as “the camera kids.”

The photos of everyday life in Rwanda taken by Gadi, Mussa, Bizimana and sixteen other camera kids are the largest known body of photographic work of Rwanda rebuilding taken by victims of the genocide. The images have been exhibited around the world and featured at the United Nations and at the premiere of Hollywood’s Hotel Rwanda.

Now adults and professional photographers themselves, the three men have gone from being students of the non-profit to becoming its teachers. Through TTEC, they’re running photo workshops around the world with the goal of helping other vulnerable children.

Their first global photo workshops were held in 2018 with immigrant teens in New Jersey and foster children in Massachusetts. Over the next year, as they travel to Haiti and the Middle East to work with orphans and refugees, GroundTruth’s film team, led by Director/Producer Beth Murphy, will be with them, documenting their journey and exploring the power of storytelling and the humanities to foster understanding.

Mass Humanities funding has gone toward two specific project goals: the creation of the above trailer, and multimedia work published in TIME and The GroundTruth Project.

The topic of genocide goes to the core of what the humanities are about: humanizing the other. By focusing on sharing and expanding the experiences of genocide survivors, both orphans and perpetrators, the project raises important questions about the past and future of our shared humanity—life and death, peace and war, pleasure and suffering, hope and despair. What is the legacy of genocide for the children of those who were killed? For the children of those who committed the atrocities? What, together, can they teach us? These issues, along with the often contradictory responses they inspire, call for humanistic methods to shed light on the truth beneath the wealth of images captured by the kids’ cameras.

Find out more about this project at groundtruthproject.org.