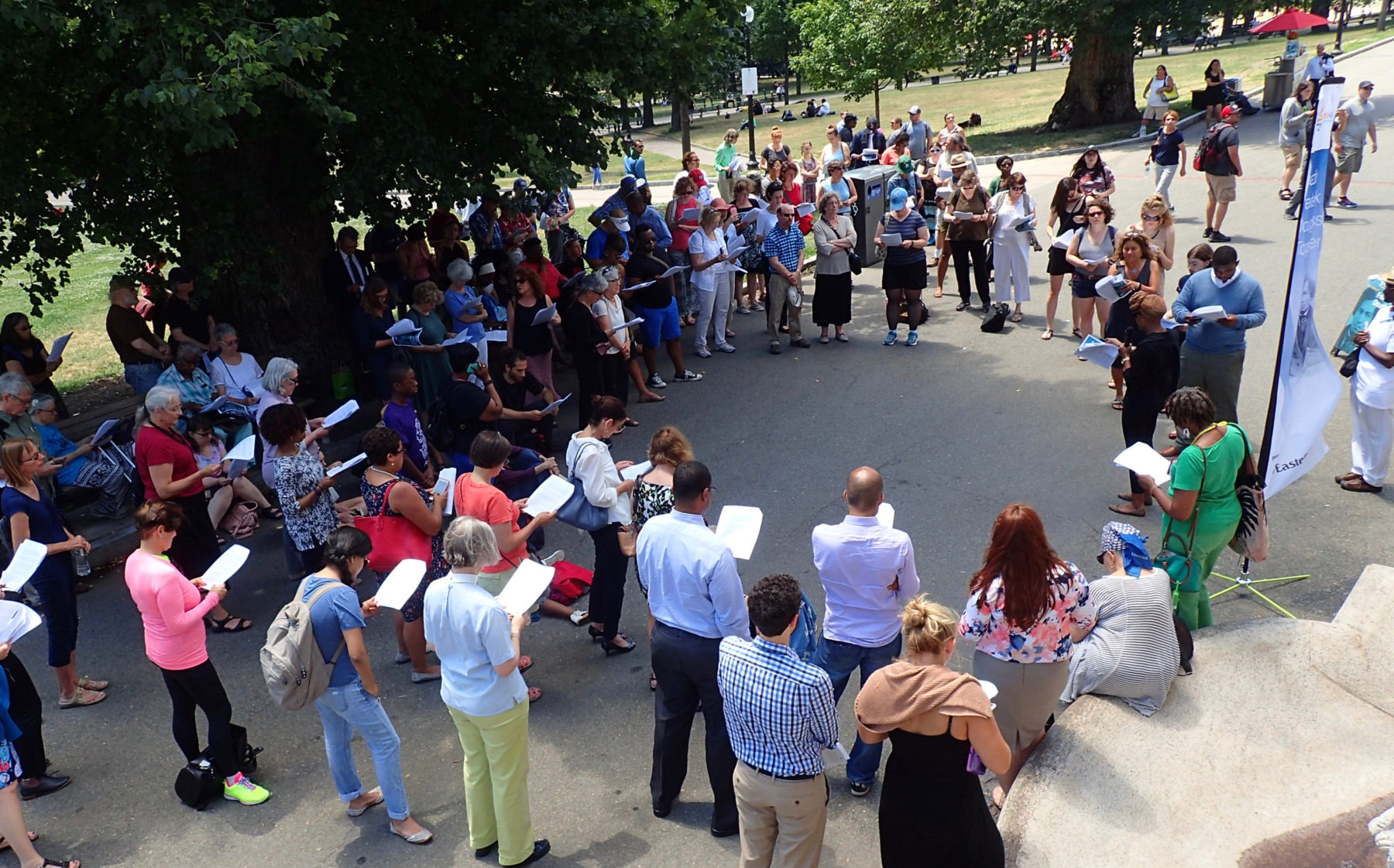 “What to the Slave is the Fourth of July?”

There is not a man beneath the canopy of heaven, that does not know that slavery is wrong for him.

The life and works of Frederick Douglass continue to shape our understanding of America. A gifted orator and prescient writer, Douglass forces us to reckon with the legacy of slavery and the promises of democracy.

Each year, Mass Humanities organizes and funds free public events where communities gather together to read and talk about Frederick Douglass’s influential address, What to the Slave is the Fourth of July?

After escaping slavery in 1838, the famous abolitionist lived for many years in Massachusetts. The most celebrated orator of his day, Douglass’ denunciations of slavery and forceful examination of the Constitution challenge us to think about the stories we tell and don’t tell, the ideas that they teach or don’t teach, and the gaps between our actions and aspirations. To quote Douglass: “We have to do with the past only as we can make it useful to the future.”

In addition to producing two signature events, Mass Humanities also provides grants to organizations interested in hosting a local public reading, in which attendees gather to read the speech out loud from start to finish.

Organizations interested in hosting an event can propose any format for the reading and discussion that will foster a rich and productive community conversation.

2023 applications open on Dec. 12, 2022 and are awarded on the schedule listed below. Readings can take place anytime within 6 months after the award announcement date, provided the application demonstrates enough time to include Mass Humanities in publicity about the reading.

Douglass escaped from slavery in 1838 and lived for many years in Massachusetts. He delivered the Fourth of July speech on July 5, 1852, in Rochester, New York, to the Rochester Ladies’ Anti-Slavery Society. The most celebrated orator of his day, Douglass’ powerful language, resolute denunciations of slavery, and forceful examination of the Constitution challenge us to think about the histories we tell, the values they teach, and if our actions match our aspirations. To quote Douglass, “We have to do with the past only as we can make it useful to the future.

When Do Readings Take Place?

Readings typically take place around between Juneteenth and Fourth of July, but communities also host readings on other days of remembrance or significance.

For the 2023, Mass Humanities invites grantees to host a reading during African American History Month and to commemorate the observance of Frederick Douglass’s birthday, both in February.

Where Do Readings Take Place?

At each event, people take turns reading parts of the speech until it is completed. Each community considers the meaning of the speech in the past and its resonances in the present.

Each year Mass Humanities partners with the Community Change, Inc. of Boston, the Charles Hamilton Houston Institute for Race and Justice at Harvard Law School, and the Museum of African American History to host a reading on Boston Common. Held near the monument to the 54th Regiment, the event attracts state legislators, students, and members of the public who take turns reading the speech.

Read About the Event

Since 2019, Mass Humanities has held an annual reading in Northampton, where residents gathered in the park outside our headquarters. Historic Northampton, David Ruggles Center, Forbes Library, the Office of State Representative Lindsay Sabadosa and the Sojourner Truth School for Social Change Leadership co-sponsored the event.

Read About the Event