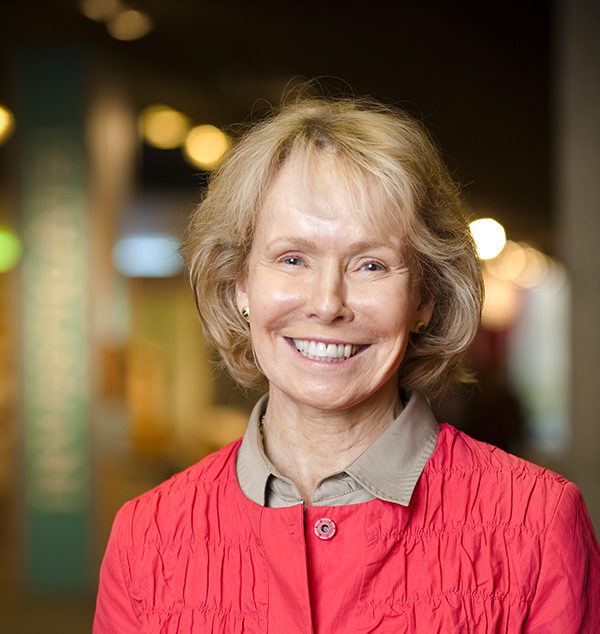 Fredi was born and raised in Jamaica Plain. She attended Boston Public Schools in her early years and went on to graduate from high school and college at two institutions that have since closed.

Neither of her parents had university degrees but they strongly encouraged all of their children to pursue higher education. Fredi and her four siblings all went on to graduate from college, law school, and business school with some pursuing doctoral studies.

Fredi’s natural leadership skills flourished in college.  She later served on the school’s board and Winsor School’s  board.  From early on, she has championed opportunities for women, a cause for which she still cares deeply.

She joined the board of the Crittendon Society and as her four children came along, she joined the boards of their schools.  She has mentored young people in both her professional life and as a volunteer for countless organizations.

After marrying her husband, Howard, Fredi began her philanthropic career in earnest.

In 1994, she was the founding board chair of Summer Search Boston and on its National Board. The goal of the program is to give students hope and confidence through challenging summer programs and on-going mentoring.  For over 26 years, Summer Search Boston has served over three thousand low income students- ninety eight percent of whom graduate from high school. In order to assure continuity of this wonderful program, Fredi decided that after twenty years, leadership had to transition to the next generation and she left the board.

While working with Summer Search, Fredi also had the opportunity to work with Hestia on its executive committee. This organization is run by women who channel philanthropic resources to improve educational outcomes in Boston and the surrounding area. Additionally, her passion for education led her to become deeply involved with the educational program at the Boston Museum of Science, “The museum has developed a marvelous program in inspiring elementary and junior high school interest and competency in engineering and technological innovation.”

Fredi’s commitment to educational causes has kept her very busy. She served on the board and then chaired the board at WBUR.  She also had the opportunity to serve on the NPR Foundation board.  In Cambridge, she served on the board of the Cambridge Center of Education and Families First. She is also a member of the Women’s Leadership Board at the Harvard Kennedy School.

Ten years ago, she joined the Smithsonian National Board. The aim is to further the interest and basic research in history, science and technology.  She had the privilege of working with the Smithsonian Science Education Center where she served as Chair for the past three years.  She was recently  nominated for the role of vice chair of the National Board and to continue on the Board of the Science Education Center.

Most recently, Fredi and her husband have become deeply involved with UpStream USA, which launched a unique program to prevent unwanted pregnancies through education about long-acting, reversible contraception. UpStream is operating in five states including Massachusetts. In Delaware, where the program was launched, records show that unplanned births are down by twenty five percent and abortions have been reduced by thirty seven percent due to the organization’s efforts.

Fredi’s humility is matched only by her generosity.

“Championing education and my work with numerous nonprofits are the major highlights of my life.  I believe in community.  Community requires understanding of where we come from, where we are and where we might go.  Art, theater, history, music, and literature are all part of our understanding of others and of humanity.  My philanthropic endeavors have given me great pleasure throughout my life that is only rivaled by the pleasure I get from being with my family.  Between Howard and me we have seven children and twelve grandchildren with 7 college degrees and 9 master’s degrees between them.”