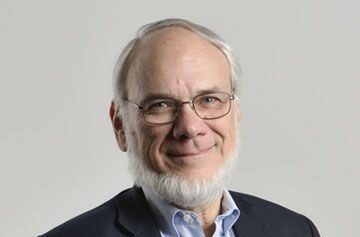 My relationship with Mass Humanities has been a two-way street. I certainly like to think that I’ve contributed in different ways, but it’s been an opportunity to get exposed to things I never would be otherwise: an exhibit in Somerville about immigrant life there, or the chance to visit a Clemente class, or to hear from a Clemente Course graduate. My mother and father didn’t have access to education, which was a real challenge for them, so it really resonates to see people who work hard to get exposure to the humanities.

I was born in Waltham and I now live in Boston. So, I guess in terms of geographic progression, I don’t have much to say for myself.  I’ve had the opportunity to teach in China and Switzerland and work in both D.C. and London.  I practiced law for many years with a wonderful group of lawyers, had a chance to teach, and have been the beneficiary of all sorts of friendships from colleagues I knew at my law firm, students, and my family. My wife practiced medicine in Chelsea for 30 years, which gave me insight into life in a different community and the challenges of the provision of medicine to all. I have two daughters and their reaction to having two professional parents, one lawyer and one doctor, was to become artists. One of them is a visual artist and the other writes for theater. She’s had a play produced at the Huntington and written for television as well. I have three grandchildren who are six, four, and two.

I attribute my first introduction in the humanities to Walter Cronkite and my mother. Growing up in the 1950s and 60s, I watched a program of short documentaries called The 20th Century, which Cronkite produced. I would talk about the show with my mother and sometimes she would share insights from her own life. My mother never graduated from high school, so this interest in political science and history and current events was something that she taught herself. She encouraged me to learn about history and current events as well. I was curious about the stories behind the things I was watching. I read a lots of history books and biographies in elementary school. I was very interested in history and what it revealed about why things were the way they were.

The time in elementary school that I spent studying the humanities, I did on my own. I don’t recall being a perfect student. I ended up in the seventh grade in the Roxbury Latin School where I joined the debating club. I got very interested in both the presentation, the rhetoric of debating and also building arguments. It wasn’t a great leap to go from an interest in debating to law later on.

In college, I was a medieval history major and took many literature courses. I was the manager for the college radio station. We broadcast the 1970 Black Panther demonstrations and trials in New Haven live. My colleagues and I were fined by the FCC for some of the language used in the live transmissions. That made me interested in the news and how truth is conveyed in history and in contemporary media. I’m on the board of WBUR now, so this is how I initially became interested in media and news.

After all that debating and rhetoric, I assumed I was going to be a lawyer and of course being a lawyer meant being a litigator. I took a job at Hale and Dorr in Boston in part because I remembered that Joe Welch had defended the U.S. army in the McCarthy hearings. He was an amazing trial lawyer and that was going to be me. Well, my plan didn’t work out. I became an international corporate lawyer and that was in fact much better for my personality.   Part of practicing law is being an educator explaining to a client why it is the way it is. I was of the view that it was better if clients understood. My father was a professor at the Harvard School of Public Health for many years. Like my mother, he did not grow up with many resources. He had an incredible range of shared experience with students from all over the world. I tried to emulate that in the law.

I practiced law mostly in the high-tech area, which I enjoyed because it presented new issues every year. An example. What does social media do to privacy? How are issues of privacy handled differently in the U.S. and Europe? Here, people worry about their privacy, but we are a bunch of individualists. We also like to show up on social media in a conspicuous fashion. The European approach is very different. They have a real concern that you shouldn’t involuntarily be subjected to personal details being disclosed.

I thought about those differences in collective histories. My German colleagues would remind me not only of the history of Nazism, but more recent history that the private details of personal life were owned in East Germany by the Stasi under Soviet supervision. There were warehouses filled with the most mundane and trivial details of people’s lives. So, the Germans have a real commitment not to see that repeated. It also raises questions of ethics, and what it means to be an individual. One of the interesting things about the humanities is that the investigation is perpetual, and the challenges are always new; this is one example we had to deal with at a practical level during my time as a lawyer.

I currently teach a course called Law of the Sea at Tufts’ Fletcher School where we explore international maritime law. People often connect literature with the sea…the Odyssey and other great works, but many don’t realize how pivotal the sea is to our daily lives. Walmart is only possible because of ocean commerce and the law of the sea. The container ship is why all that stuff moves around the world and container ship commerce only works because the law of the sea embodies and endorses the doctrine of freedom of trade.

Freedom of trade was at the center of the growth of the Dutch and British empires. The ability to travel into other oceans was at the heart of the expansion of a European during the 17th, 18th, 19th centuries. There is a parody English school book called “1066 and All That”, that summarizes that imperial subtext perfectly. It says the ancient rule of freedom of the seas was also known as “Rule Britannia”. The freedom to seize what you want and do what you want with it. It means it’s very hard to police pollution. It means it’s very hard to deal with climate issues in the world’s oceans. And those climate issues are critical. The way the history of the law in this context has evolved may create real problems for us going forward. The humanities are an integral part of dealing with these serious issues.

My favorite part of teaching is learning from the students. Last year I had students from the Chinese foreign ministry, the U.S. Navy and Korean coast guard who were approaching the issues from an ecological standpoint, a military perspective or through the lens of the rights of indigenous peoples in the high north. One key thing my father taught me is that you learn a lot from your students, and they can learn from each other. It goes back to the issues of debating and those humanities disciplines. What principles are you arguing from? How do you relate them? How do you listen to others respectfully?

In the early 1990s, I spent some time with a working group at Harvard’s Kennedy School on advanced weapons technologies. I got a call through the Council on Foreign Relations saying they were doing fellowships. I applied within the area of arms control and ended up spending a year at the U.S. State Department during the Strategic Arms Reduction Treaty (START) negotiations with the Soviet Union

As a lifelong Democrat, it was interesting working in the Reagan administration. Reagan’s attitude towards these issues was complicated and his attitude towards Russia very clear, but he and Gorbachev both for different reasons had some convergence on the fact that both nations were wildly oversupplied with enormously destructive weapons. Given my interest in European history and background, I ended up on a subset of START called the Intermediate Nuclear Forces Treaty, which banned short range nuclear missiles in Europe. And it actually got signed. I was very impressed with my colleagues, whether they were Foreign Service officers or military officers; they were truly dedicated civil servants.

It has been a turbulent time recently in our country and around the world, but I admit to some degree of optimism on a number of fronts. When you actually look at the scientific response to the COVID-19 pandemic, it’s been extraordinarily successful. In terms of the national response, there are two ways to look at it. One is to argue the bitter division, the incompetence, the politicization of the whole process. But when you look at examples in history, you can say that it could have been worse. There was wide compliance across an individualistic population. There was a real commitment in terms of mask wearing, getting vaccinated, complying with public spacing limitations; that speaks of the civic life, which can’t be ignored. Still, it remains a time of fragility.

The humanities remind us of the value of being human, and what it is to be a person and the value of civic life, both in terms of its rights and its responsibilities. Taking those away makes it easier to dehumanize people, and that can happen very quickly. And once you’ve dehumanized people, you can end up in a world of the Gestapo agent or the lynch mob. It’s troubling when you realize how fragile those bonds are. The humanities are part of the glue, part of the strengthening of those bonds.