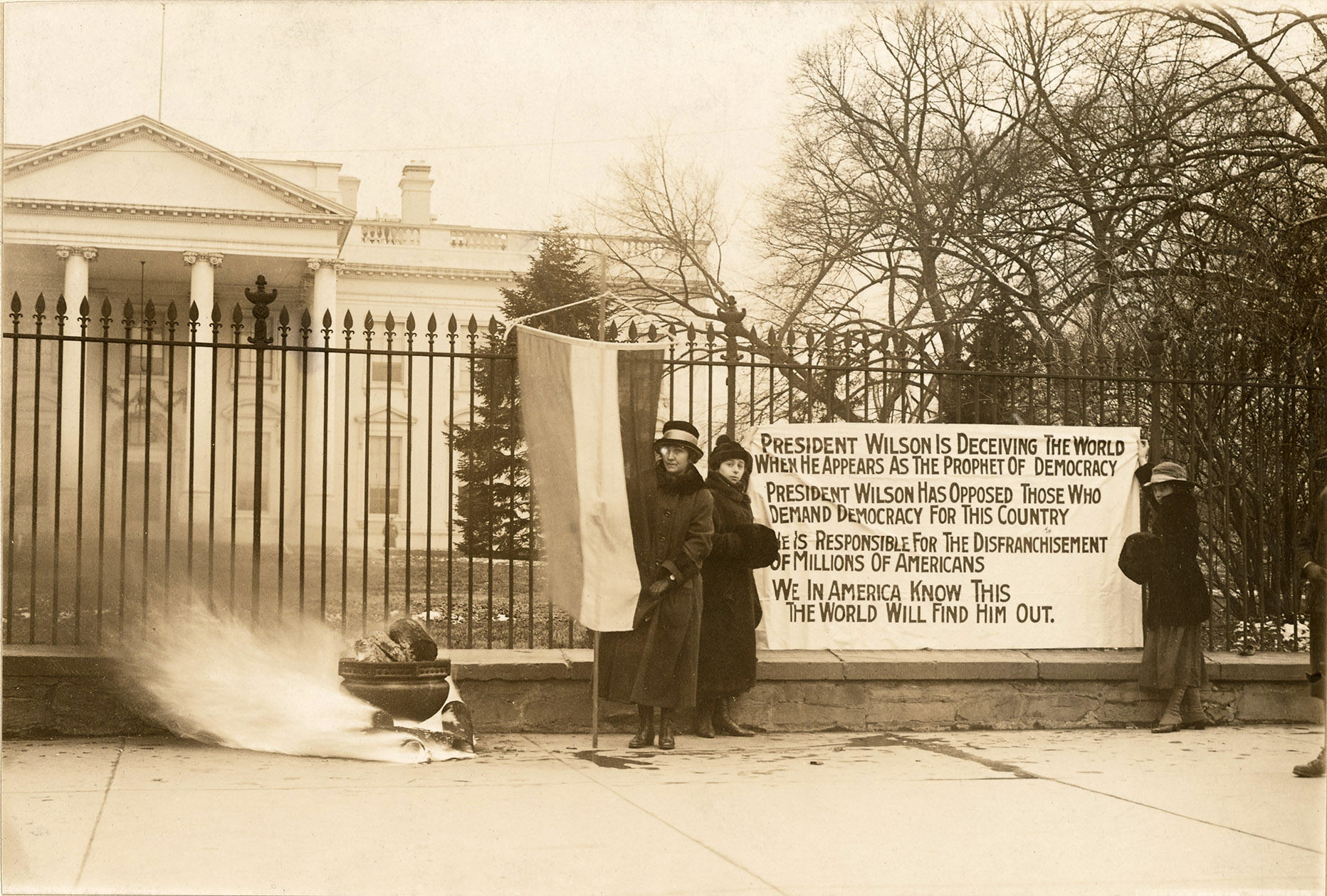 This year the nation celebrates the 100th anniversary of the ratification of the 19th amendment, which gave women the right to vote. Plans ranging from festive parades to scholarly publications are underway around the nation. Coinciding with the 2020 presidential campaign, the anniversary year offers a litmus test for the role of history in our polarized political climate. The evolution of suffrage in America is complicated, and so, too, is the commemoration of 19th amendment. That’s a good thing.

The most recent controversy erupted last month, when a Washington Post reporter visiting the National Archives exhibition “Rightfully Hers: American Women and the Vote,” found a very specific alteration to one of the featured images. For the display of Mario Tama’s photograph of the 2017 Women’s March in Washington, the curators blurred out signs mentioning President Trump as well as a part of the female anatomy.

A Twitter firestorm ensued and the National Archives quickly issued an apology for a decision, made “as a non-partisan, non-political federal agency,” to blur the President’s name and avoid engaging in “current political controversy.”

“Modifying the image was an attempt on our part to keep the focus on the records,” said a spokeswoman.

Government agencies serve the people of the United States. That mission gets exponentially harder when people are deeply divided. The National Archives is the property of every citizen, regardless of their political views. Yet by making the choice to erase portions of the historical record, the curators took their focus off the records and created just the sort of controversy they were looking to avoid. To begin choosing which parts of history are too complicated to risk telling charts a dangerous course.

History is riddled with complications. The history of Massachusetts’ role in the passage of the 19th amendment is a perfect example. We can take pride in hosting the first National Women’s Rights Conference, which took place in Worcester in 1850. But we must not shy away from the resistance those leaders faced in the Bay State. As Barbara F. Berenson has noted, “Massachusetts led the deep and prolonged resistance to woman suffrage.” A state referendum to grant women the right to vote failed in 1915, just 5 years prior to the passage of the 19th amendment. Motivations on both sides of the debate were informed by attitudes towards religion, immigration, and race. And even after the ratification of the 19th amendment, many women of color were still effectively denied the vote for decades to come. The struggle for the vote was passionate, messy, and ultimately victorious, but there is no simple way to tell its story.

When we engage with history, we must commit to exploring its complexity. The political climate in our country might make this difficult, but there can be no authentic commemoration without the courage to talk openly about the multi-dimensional histories of the events we commemorate.

Fortunately, there will be opportunities to do just that this year. At Mass Humanities, we see the centennial of the 19th amendment as a chance for a statewide conversation about voting, including the history of battles over the ballot box and debates coursing through the nation today. Through a new initiative, “The Vote,” we’re supporting 17 Massachusetts communities in their plans to explore who gets to vote, how they won that right, and who else still strives for access to the voting booth.

From Pittsfield to Gloucester, Cambridge to Brockton, “The Vote” projects will take place in libraries, museums, community organizations, and educational institutions. Residents will learn about the vote through documentary films, exhibitions, and other free public events, as well as through professional development workshops for teachers. Just as importantly, residents will have the opportunity to think more deeply about voting as a civic practice.

We applaud the National Archives for acknowledging its mistake. In 2020, we’d do well to remember the words of Frederick Douglass: “We have to do with the past only as we can make it useful to the present and the future.” The work begins with an honest, clear-eyed accounting of our complicated history.