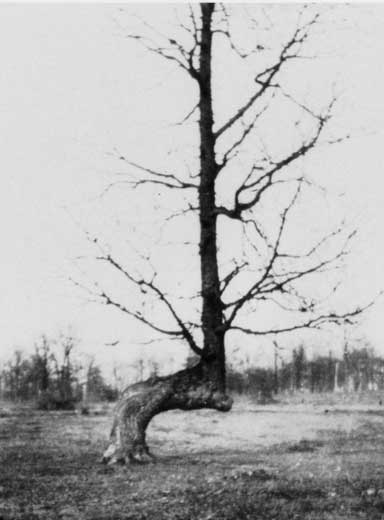 For centuries, Native Americans used many different means to mark the boundaries between their tribal territories and hunting grounds, as well as to mark their trails and convey important messages. Some of these markers were upright standing stones, others were pictographs or petroglyphs, symbols were painted or carved onto trees, large earthen mounds, and even intentionally shaped trees or Trail Marker Trees were used. Depending on the area the Native Americans inhabited, they could also reference natural boundaries such as rivers, mountain ranges, and even the edges of dense forests or swamps.

One of the earliest documented examples of a standing stone marker in North America was recorded by Conrad Weiser in 1748 near modern-day Huntingdon, Pennsylvania. Weiser was a pioneer, interpreter, judge, and worked for the provincial government. In his teens, Weiser lived among the Mohawk tribe to learn their language and practices. This standing stone stood along the banks of the Juniata River in Pennsylvania; it was documented to be at least fourteen feet tall, six inches in width, and six inches in depth. The stone had ancient writings and symbols carved into it to convey information. It was referred to by numerous early explorers and settlers until it was removed in 1754. Around that time, orders were given by the British to remove anything that indicated higher intelligence and communication skills possessed by the native inhabitants of the land. This practice does explain the disappearance of other standing stones that were mentioned in numerous states in the 1700’s and 1800’s. Although, it is said that the Huntingdon standing stone was removed by the Onieda. A memorial replica of this stone was erected on September 8th, 1896 in Huntingdon, Pennsylvania, that is still standing today.

Orders were given by the British to remove anything that indicated higher intelligence and communication skills possessed by the native inhabitants of the land.

When the resources were available, the practice of carving into or painting on large flat surface stones was used to convey travel and boundary information. This practice was used here in the Great Lakes Region, as documented by Henry Schoolcraft, a noted geographer and ethnologist who studied the Native Americans and their practices in the 1800s. This practice was also used throughout the west and countless examples of pictographs and petroglyphs have been recorded. The Western region had a wealth of stone surfaces to utilize for this practice.

Another method that was commonly used in the southern region was painting specific trunks of trees along the main trails. The Indians would paint the bottom five or six feet of the trunk bright red, or as red as their natural paints (red ochre) and stains would allow, again conveying information that you are leaving one territory and entering another. Other boundaries between Native American tribes would leave little to the imagination, utilizing bones and skulls that were hung on posts or trees to let the traveler know he has entered a different realm. Similarly, yet a more modern version, in cities today the spray painted markings on buildings, sidewalks, and billboards convey boundary and territorial warnings.

These methods could all be covered at length individually; however, for thirty years I have focused my research on the Native American Trail Marker Trees. Trail Marker Trees are culturally modified trees that were part of an extensive land and water navigation system that was in place long before the first European settlers arrived in North America. These trees had distinctive shapes and characteristics that would differentiate them from other trees that may have had natural deformities or anomalies. By utilizing trees, the Indians had a flexible sapling that was easy to shape while young, that would develop into a solid marker that would last for centuries. Trail Marker Trees and Marker Trees were used to guide during navigation, to mark significant or ceremonial locations, and even to denote boundaries. These trees had variations in their shapes and characteristics from region to region and from tribe to tribe.

One well documented example of a boundary tree is located in Alabama. This tree was shaped while young to grow into a very distinctive shape, which resembles a modern day goal post. During my research, I learned that this tree marked the boundary between two local Cherokee tribes. It also stands upon a geographical divide within the William Bankhead National Forest. Another well documented tree is the Directional Trail Marker Tree that stood just outside of Lake Forest, Illinois. This characteristic example was studied in the early 1900’s by scholars and historians such as Frank Grover, Jens Jensen, Bess Dunn, and Dr. Raymond Janssen. This tree was part of an extensive trail system throughout what today is the Chicagoland area. Trail Marker Trees and Marker Trees were once as common to our landscape as exit signs on our major highways are today; they graced the land from one end of the continent to the other. These historical icons are quickly disappearing from our landscape due to both age and natural causes, as well as modern development.

In general, the Native Americans did not believe in owning land as individuals; however, this does not mean that they did not believe they had certain rights to specific areas that superseded another tribe’s rights. The Native Americans were very resourceful in marking and denoting not only their boundaries and territories, but also their trails and footpaths. Although the practice of marking boundaries varies vastly throughout the world, it is a practice that is as old as time itself.