The Vote 2020: A Statewide Conversation About Voting 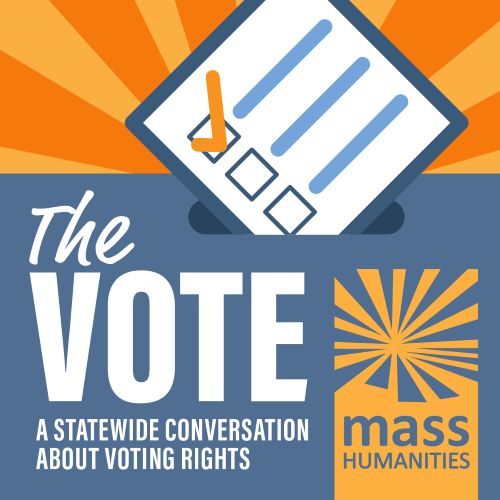 The humanities are essential for understanding our democracy.

Through a special grant opportunity for 2020, Mass Humanities is proud to announce “The Vote,” a statewide conversation about the past, present and future of voting rights.

“The Vote” commemorates the centennial of the 19th Amendment through grants to 17 Massachusetts organizations, funded as part of the Fall 2019 Project Grant and the Winter 2019 Discussion Grant. Through public events, workshops for educators, museum exhibitions and new research, “The Vote” provides Massachusetts residents with free opportunities to consider issues including women’s suffrage, the Civil Rights movement, voter suppression, civics education, and teen voting.

Click here to see the list of upcoming “The Vote” events and video recordings of past events.

About the 19th Amendment

The 19th Amendment to the U.S. Constitution declared that the right to vote could not be denied on the basis of a person’s sex. Ratified in 1920, it marked a major victory in the women’s movement by extending the vote to women.

But with racism and xenophobia on the rise in the late nineteenth and early twentieth centuries, many women of color, like their menfolk, could still not vote. Poll taxes and literacy tests effectively barred many African Americans from voting, especially in the South, and Native Americans in 1920 could gain the right to vote only by severing their ties to their tribes. Many states had passed laws making it illegal for noncitizens to vote, and Chinese Americans were barred from citizenship. Clearly the ratification of the 19th Amendment represents a complicated moment in our nation’s history, one that warrants thoughtful reflection on how to commemorate it.

The year 2020 arrives at another pivotal period in our nation’s electoral history. Some states are considering extending the franchise to felons and younger teens, while others have increased the hurdles to voting. As voting rights, voter fraud, and electoral security are being debated across the country, the humanities offer essential resources for deepening our understanding of this moment.

Support for “The Vote”

Funding for The Vote grant initiative comes from the National Endowment for the Humanities and the Massachusetts Cultural Council, and from individuals including the following:

Funding for The Vote grant initiative comes from the National Endowment for the Humanities and the Massachusetts Cultural Council, and from individuals including the following:
Al and Sally Griggs
Lia and William Poorvu
Jack and Joan Regan
Gail Reimer
Laura B. Roberts and Ed Belove

“The Vote” marks the latest effort by Mass Humanities’ to commemorate the 19th Amendment.

Until 1999, all of the many works of art displayed in the Commonwealth’s most important public building depicted men, and white men at that.

In 1995, sparked by the 75th anniversary of the 19th amendment, the Massachusetts State Senate asked Mass Humanities to coordinate the Statehouse Women’s Leadership Project. An advisory committee formed to create “Hear Us,” a monument to six women who contribute to the government of the Commonwealth.

Today, visitors to the State House can stop just outside Doric Hall to see the bronze busts of Dorthea Dix, Lucy Stone, Sarah Parker Remond, Josephine St. Peirre Ruffin, Mary Kenney O’Sullivan, and Florence Luscomb. As part of the initiative, Mass Humanities also created educator tools and a brochure about the women portrayed in “Hear Us.”