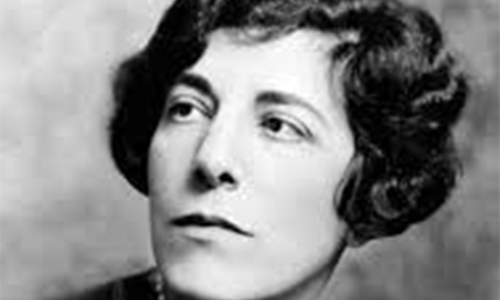 In a previous post I discussed how the work of 20th century middlebrow writers is in danger of being forgotten, but shouldn’t be: they still have much to say to present-day readers. The first middlebrow writer waiting to be rediscovered is Edna Ferber (1885-1968), whose body of work includes Show Boat, Pulitzer Prize-winning So Big, and my topic of discussion here: the 1929 novel Cimarron.
—

Cimarron begins in the late 1880s with an elegant dinner party at the Wichita home of Lewis and Felice Venable, “[unwilling emigres, war ruined…[t]ransplanted from Mississippi to Kansas more than two decades before.” In spite of the family’s post-Civil War decline, the Venables retain their cherished plantation manners and attitudes. As the narrative opens, members of this “vitiated family” are listening to their son-in-law, Yancey Cravat, describe his participation in the Oklahoma land rush. Yancey is a compelling speaker, but he neglects to mention that the Rush involved white settlers vying for land seized by the U.S. government from Native Americans. Nor does he mention that the displaced tribes are now relegated to bleak and barren reservations. Although Yancey often demonstrates compassion and sensitivity toward displaced minorities, here he speaks in the voice of the adventurer who forgets that his explorations can impinge on the rights of others.

Entranced by Yancey’s tale, the dinner guests pay no attention to Isaiah, a young black servant perched “high above the table, and directly over it, on a narrow board suspended by rods from the lofty ceiling.” Isaiah’s job is to fan the family with a “shoefly of feathery asparagus ferns cut from the early garden.” Although the Civil War is long over, neither the Venables (the association with “venerable” is deliberate) nor Isaiah seem to find anything “untoward in this remnant of Mississippi feudalism.” Isaiah is situated within the greater family constellation but so far at its margins that the others can easily ignore his presence. But the youth isn’t destined to remain on the periphery; as he leans “farther and farther forward, the better to hear and see all of the scene that was spread beneath him,” he falls from his perch “directly into the midst of Felice Venable’s white and virgin frosted silver cake.” Isaiah, and with him the place of race and diversity in America, crashes directly into the center of Ferber’s narrative.

Isaiah, and with him the place of race and diversity in America, crashes directly into the center of Ferber’s narrative.

Isaiah stows away with Yancey and his wife Sabra when they leave Wichita for the Oklahoma territory, but never succeeds in becoming a full member of the frontier community. He’s not alone in failing to enter so-called “normative” American society. Sol Levy, for example, is an Eastern-European Jewish immigrant who works first as a peddler throughout the territory and eventually opens a successful retail store in the new town of Osage. His challenge is to avoid threatening members of the local establishment with his “foreign” manners and religion. Dixie Lee, the town madam, is another outsider; like the Venables, she is a ruined Southern aristocrat who has been forced off her family’s plantation. Her efforts to give up her way of life and settle into bourgeois society are thwarted by the sunbonnets, a group of sanctimonious townswomen who try to impose the “respectable” values of their former communities on their new frontier town. Other outsider characters include Native Americans and an outlaw known as The Kid, all of whom have been displaced by the federal government to make room for the settlers and who demonstrate resistance by refusing to conform.

The contemporary reader will be taken aback by Ferber’s stereotypical references to minority characters that serve as jarring notes in a novel so clearly intended to be sensitive to the position of outsiders in the American community. In recognizing Ferber’s own colonialist attitudes—even as she is writing an anti-colonial narrative—we must keep in mind not only the era in which she was writing, but also the fact that she intended Cimarron as satire and expressed frustration that it was most often considered a straightforward Western narrative. And it is fascinating to see how Ferber, writing almost a century ago, deals with issues of race and ethnicity that we are still dealing with today. Through a series of subplots, Ferber sets forward different approaches to these issues, ranging from full assimilation of new immigrants and other outsider communities to a multiculturalism that accepts and incorporates ethnic diversity to an extreme nativist call for the “humane but effective” extermination of Native Americans and other minorities.

Ferber’s own view of how the U.S. can best create a unified society out of its diverse populations is put forward in her description of Yancey and Sabra’s complicated marriage and Yancey’s belief that their mixed-race grandchildren represent the potential for the American future. Sabra and Yancey are different kinds of people, yet each represents a quintessential American type: Yancey is the open-minded adventurer who seeks out an infinite variety of peoples, cultures, and experiences, but who unconsciously betrays even the people he loves most; Sabra is the pragmatic and efficient leader who tends to rigidity and intolerance. The combination and recombination of their personalities throughout their marriage reflect Ferber’s view of an American future that is imperfect but based on the acceptance of diversity.

Cimarron begins in the 1880s with an extended portrait of a “vitiated family” that refuses to let go of the past. It ends some forty years later in an oil field that symbolizes a future in which the U.S. will ruthlessly exploit its people and natural resources but also create one of the most forward-looking and dynamic societies of the twentieth century. The question of how best to create an equitable multicultural society is as relevant today as it was when the novel was first published and America’s problems involving the fair and peaceful integration of all its people continue to resist simple solutions. But as Sol Levy, Ferber’s sad-eyed Eastern European Jew, might put it, if we are not required to complete the work, neither are we permitted to refrain from it.